Yes, I know the summer has flown, but I did promise, when I posted my “early phase” Cedar House garden tour a few weeks back, that I would return with updates as the season progressed and our gardens grew in splendor. My intentions were to keep up with all this as it happened, of course, but somehow Mother Nature got ahead of me, and only now do I have the opportunity to display her astonishing wares with the care they deserve.

Since there are very definitely three phases to our beach house garden, I’ve decided to share this journey in three photo essays: The first one, of course, showcased the bright greens and pinks of spring; this second, midsummer, edition is lit with the brilliance of summer finery; and finally, the waning, wisened garden, chastened by a couple of strong storms but still erect like a proud dowager Empress, will conclude the series in a week or so to give you at least a little time between.

Also, as those of you who follow this blog already know, I posted a separate essay on our day lilies this summer which were so magical they demanded their own separate showing. (you can find it here: https://inpraiseofangels.wordpress.com/2015/09/04/day-lilies/) So, ultimately, there was enough beauty to fill four long slide shows for, I hope, your viewing pleasure. I do try to edit them down, and most shots are left behind on the cutting room floor, so I hope this doesn’t go on too long. It is organized just as the first one was, with the deck plantings, followed by the Shady Side and finally, just a couple from the Sunny Side. (Also, if you click on a photo, it will open up in a separate window which may help you see the whole thing at once, depending on what device you may be using.) Enjoy! 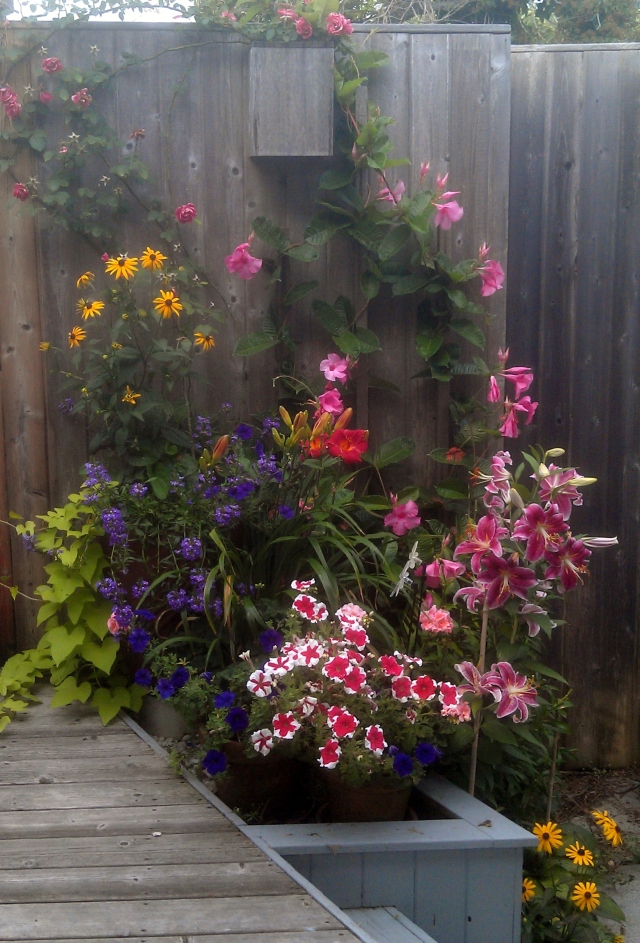 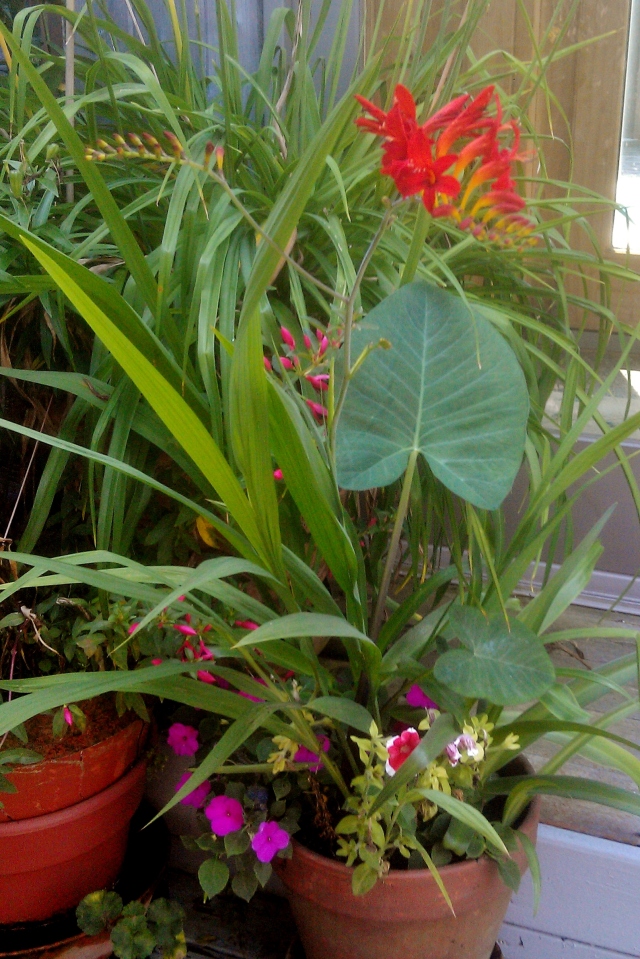 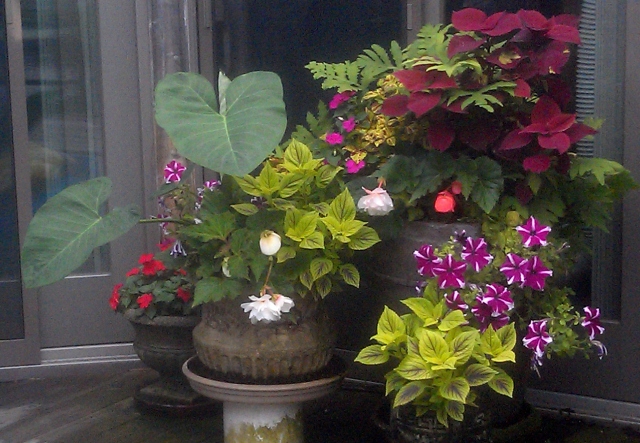 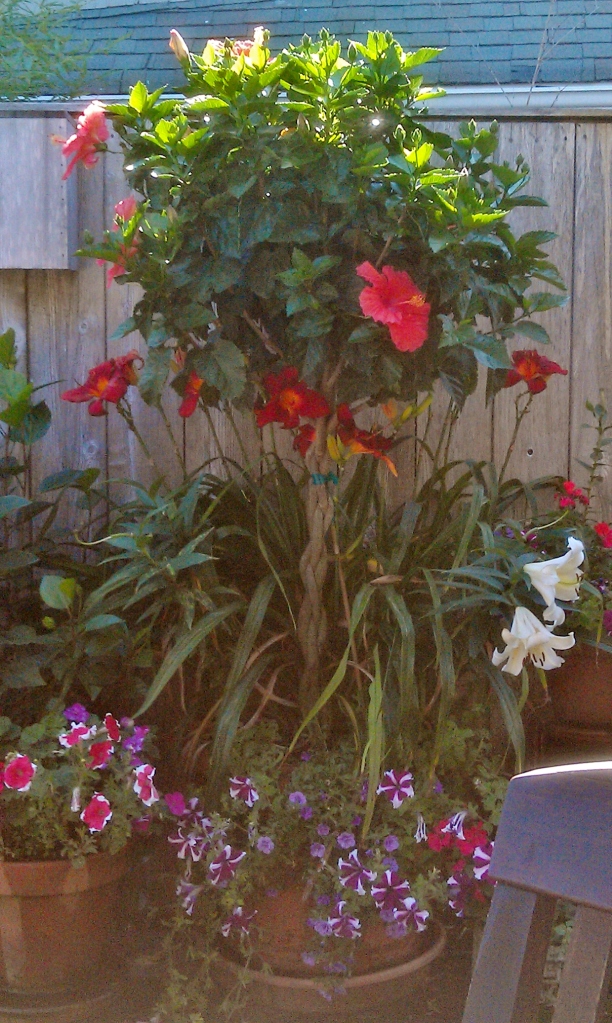 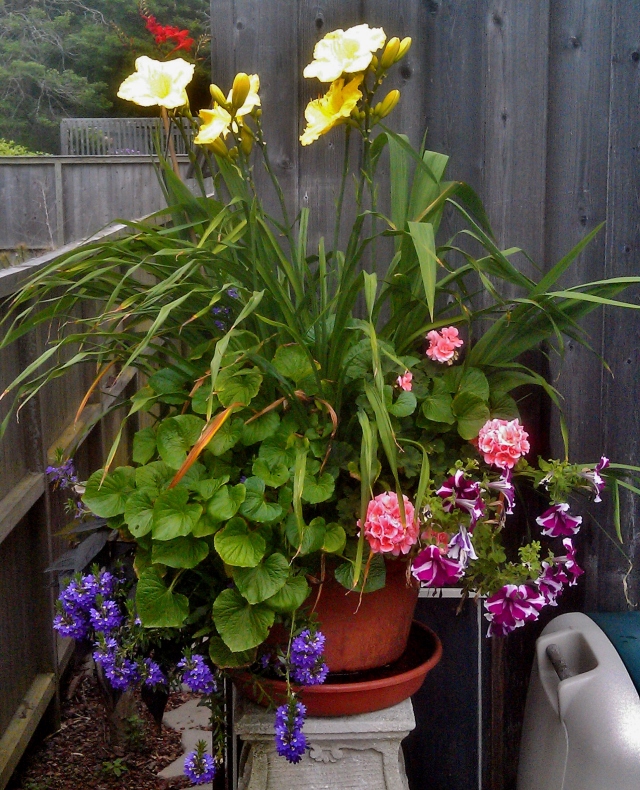 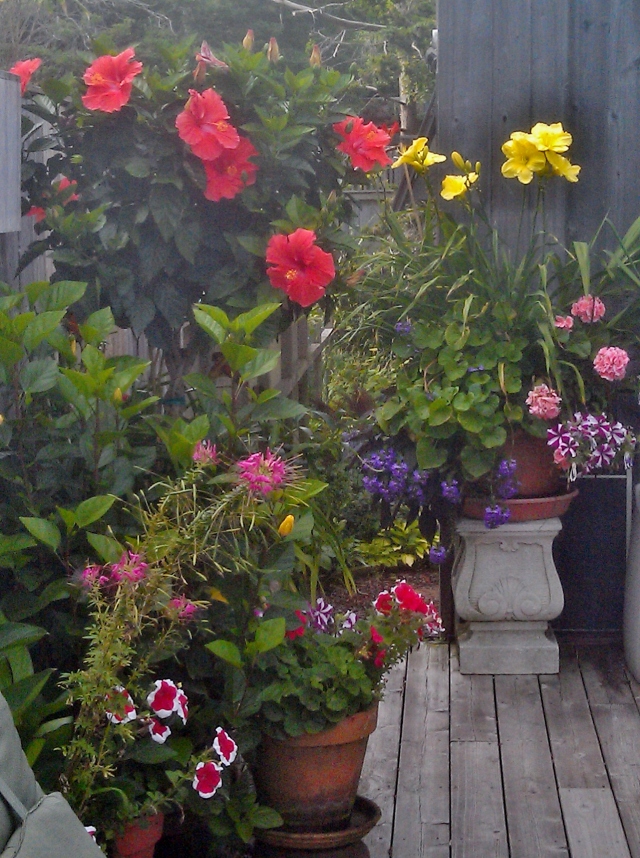 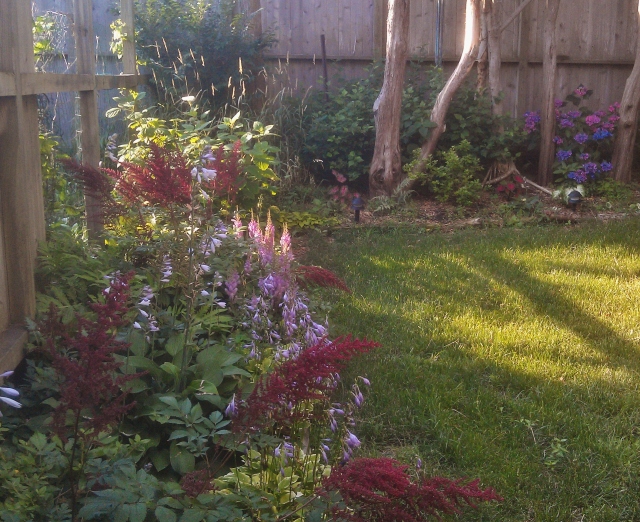 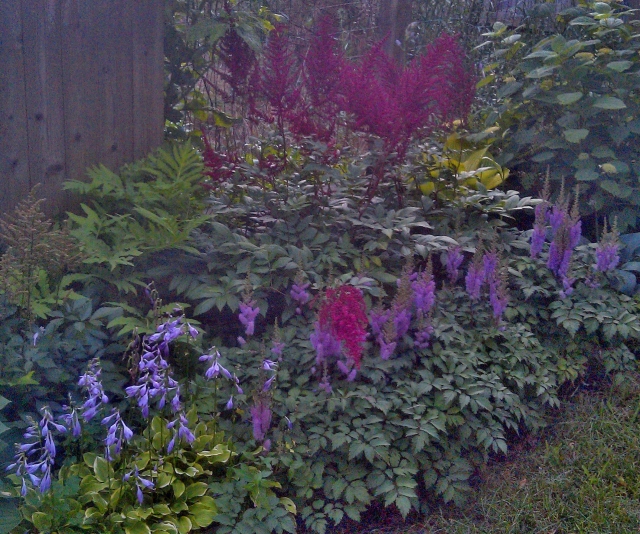 If I have a favorite surprise from this year’s garden, it has to be the hydrangea bush shown below. I’ve always heard that you could change the color of a hydrangea by changing the acidity of the soil, but it never occurred to me that you might be able to grow a multi-colored one. The secret is in the rusty old barrel hoop that you can see sticking out of the ground just to the right of the little red caladium leaves. Left over and imbedded in roots, it is the remains of a half-barrel planter that used to sit where it is, but long ago rotted away. My assumption is that some of the roots of the hydrangea have managed to wrap themselves around the iron, and some of them haven’t, which accounts for the unique and beautiful array of flowers. I have dozens of photos of this one bush. It was impossible to resist. 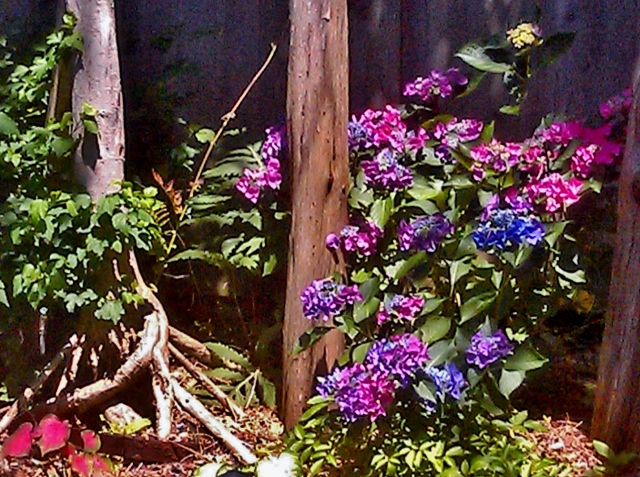 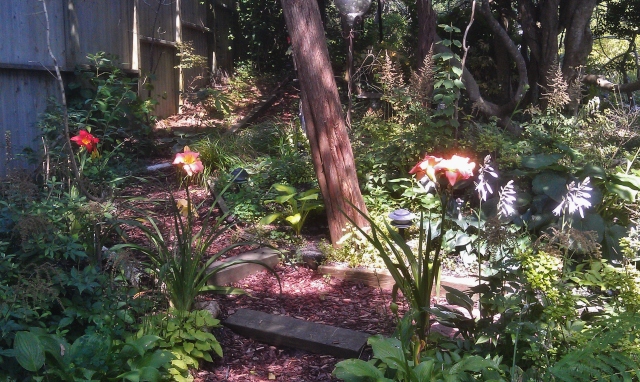 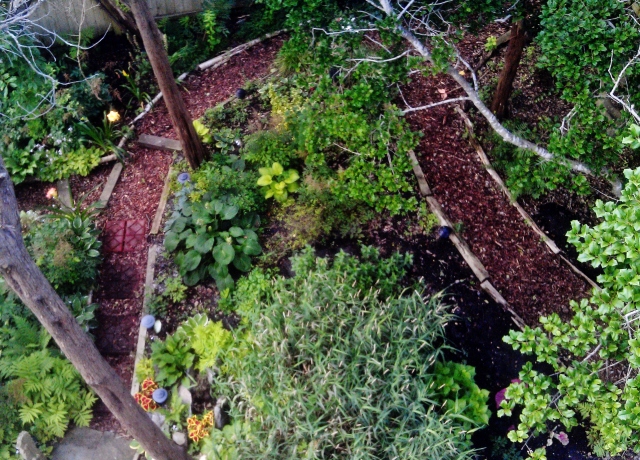 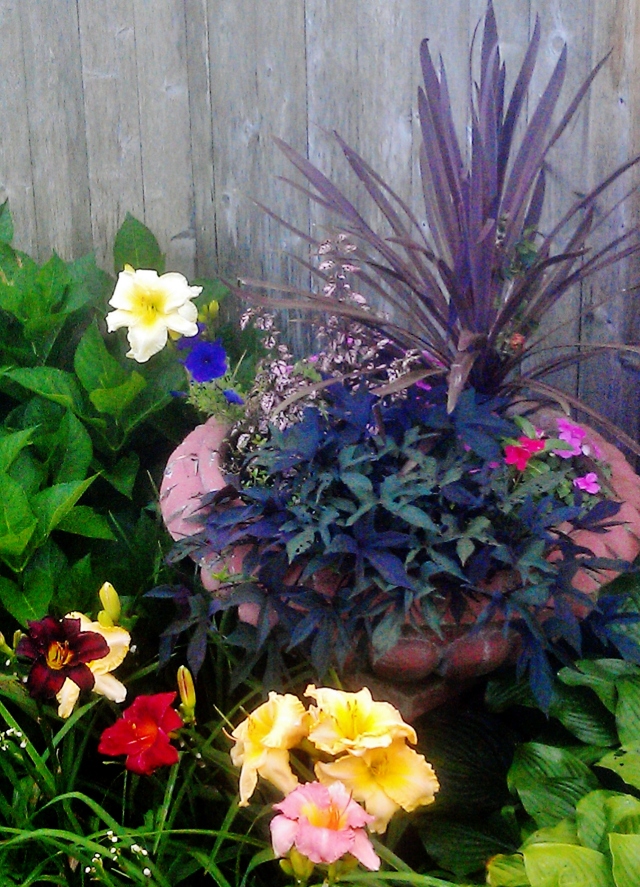 This last calla lily is another angel gift for which there is no accounting. I planted it along

Long after all the other day lilies were done and gone, this single last bloom appeared, bright as a new penny, on Labor Day. It was as if it was saying, “Thanks for the memories and a great, beautiful summer!”

with a whole collection the first year we moved into the house, but callas are summerbulbs, and unless you dig them up to overwinter them in a  cool, dry, dark place (which I did not choose to do since that would have involved transporting them to the city and keeping them in a closet), the freeze of winter will kill them. Except for this one. Blooming for the 20th consecutive year just beside our front door, it has never failed to grow and bloom, and every year – especially after particularly harsh winters (or salt-water flooding a la Sandy) – we wonder if we shall see it again. To date, she has never disappointed us, and this year, she not only grew and flowered, she even generated three additional offshoots. It is possible, of course, that it has something to do with its proximity to the septic tank, but I prefer to give the credit to my angels.

Finally, since I’m always talking about the beach house but never showing the ocean, here’s a view I took a couple of weeks ago just a few steps from our front gate. This really is a beach garden and we are truly, truly blessed, in spite of the occasional salt spray showers and crazy storms.

Wishing each and everyone of you a blessed day, thanks for allowing me into your life, and I hope you enjoyed the angel gifts, for what else could such astonishments be?